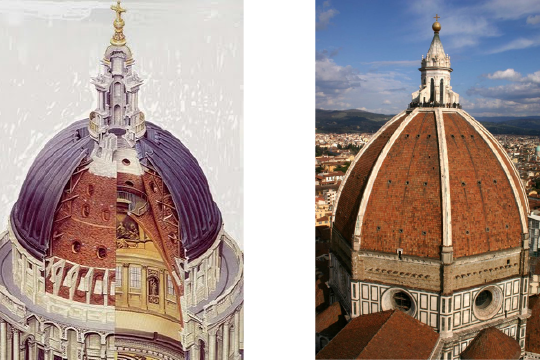 Florence, Italy is known throughout the world for the quality of its art, architecture and craftsmanship. Florentines owe much of their present glory to the powerful merchant families that emerged in the 13th and 14th centuries. Those families sponsored artists, funded building projects and created a market for beautifully-crafted luxury goods that made Florence a cultural powerhouse during the Renaissance.

These influential families provided resources, protection and connections for visionaries like Filippo Brunelleschi, Leonardo da Vinci and Michelangelo, and a host of lesser known architects and artisans. In response, they developed innovations in painting, sculpture, architecture, leather, textiles, food and wine. The patrons paid the bills, but they also set high expectations and rewarded those who could meet them with more and more ambitious commissions.

When you are an Executive Sponsor for innovation in a corporate environment, you play the role the Medicis played for the Florentine artists and architects: you provide funding, connections, accountability and guidance to your Innovation Teams. You identify the next visionaries, protect them from organizational politics where necessary, and ensure that their projects maintain strategic priority. Corporate Innovation Teams need specific types of help from you to overcome your company’s natural inertia and resistance to change.

As a sponsor, your job does not begin with funding and end with review meetings. There is a lot more you can do for your teams:

You can kill an Innovation Team by giving them too much money. They will have no incentive to delay expensive investigations until faster and cheaper options have been fully exploited. At the same time, large pots of money that have been allocated to fuzzy long-term projects are prime targets for reallocation to sustaining projects with shorter payback times.

Executive Sponsors support Innovation Teams by setting aside specific funds for concept exploration and development that are protected from corporate budget games, and then allocating those funds to teams in small doses. The teams benefit from the funding stability — at the same time, the small amounts ensure that the teams stay focused on one clear direction. It helps them prioritize speed over thoroughness when 80% certainty is enough validation for the next step.

You can also kill an Innovation Team by giving them too much time between major reviews. Since the team may be working on projects that are years away from commercialization, there is little natural pull to get things done. At the same time, Innovation Teams can get pulled lots of different directions that make it easy for them to lose sight of their goals. When you take the time to participate in short cycles of frequent review you ensure that the teams stay aligned with the company’s true needs, while giving you the opportunity to take the journey with the team, so that you are not surprised by the team’s final destination.

Leverage Your Networks to Build the Team

In the Renaissance, Leonardo da Vinci could make major advances in several fields at one time as an individual innovator. Today, we specialize, so we need our friends in other disciplines. Innovation Teams should include marketing and technical representation from the very beginning, on any product that the company does not already know how to make.

As the Executive Sponsor, you are well-placed to assist the team with finding complementary skills in other functional areas. It may be difficult for an Engineering-driven group to find the right Marketing representation or vice versa. Your relationships with your peers can help you spot talent the team can’t see. You may also have connections with potential customers, suppliers or partners outside your company that your teams can leverage.

The Innovation Team needs to be able to look ahead and see where their idea is going. At some point, this innovation will need to be absorbed by the organization — and yet if this happens too soon, the new idea will lose out to incremental innovations that have shorter pay-back times and more certainty. Your company needs a path for innovation that establishes escalating hurdles to fund the next stage of development without being forced into competition with incremental development.

The company needs to build a pathway for these innovations that gives them time and space to mature without being locked away from the rest of the company. Your role as Executive Sponsor is to establish the path and then guide teams down that path as you prepare the other leaders within the organization for the day when the Innovation Team transitions to a product development team.

Give Teams the Freedom to Fail Fast

Finally, these teams need to be free to explore ideas knowing that most of them won’t work out. In fact, the teams should be encouraged to fail fast and fail often, because the more ideas they can evaluate, the more likely they are to find the game-changing idea to take your company into the future. As long as everyone learns from the failure, it should be considered a success.

It helps if the teams see that you have an attachment to exploration and learning, rather than an attachment to specific results. If the best idea turns out to have major flaws, the Innovation Team just saved you a ton of money. And sometimes an idea that looks wrong on the surface can turn into a huge growth opportunity. If you could predict all of this in advance, you wouldn’t need the Innovation Team.

Three Ways Executive Sponsors Give Teams What They Don’t Need

Corporate innovation is notoriously difficult, but some well-meaning advice in this area has done much more harm than good. Here are three “best practices” for Executive Sponsors that have not led to better results for the companies that have adopted them.

Foster “Intrapreneurship.” Entrepreneurs who found companies simply have more skin in the game, and receive more rewards than any corporate innovator will ever be able to realize. No compensation scheme in the world is going to allow a corporate inventor to reap rewards on the scale of Sergey Brin, Jeff Bezos or Bill Gates. This is why the patronage model is a better fit than the venture capital model: the artists of the Italian Renaissance traded off complete freedom for personal financial security, and so do your corporate innovators. The protection you can provide from the corporate political environment is at least as important, if not more so, than the funding, and you should play a stronger role in steering the project than the typical start-up investor.

“Skunkworks” to isolate the people focused on innovation from the core business. The Florentine patrons did not lock all these innovators up in a monastery on a hill and deny them access to the rest of the city in order to “protect” them from worldly influences. Yet when we put innovation teams into “skunkworks” environments and tell them to “be radical innovators” that’s exactly what we are doing. Instead, Innovation Teams need to be grounded in the current reality of the business without being restrained by it. They need to maintain strong connections with their peers as they develop and evaluate new ideas.

Over-attachment to “pet projects” without subjecting them to the same rigorous evaluation. Innovators tend to fall in love with their ideas, and Executive Sponsors are not immune from this. Make sure that your own ideas receive the same rigorous vetting that all other ideas receive, and don’t get too attached to any one way of implementing a vision.

Florence’s Galleria d’Uffizi is full of wonderful creations that required strong sponsorship to bring the artists’ visions into fruition. They needed money, but they also needed the ability to work within a community of artisans, to receive guidance about how to produce works that would attract sponsorship, the expectation of excellence and the freedom to push the boundaries of the art. Their patrons pulled some of the greatest work in Western civilization out of the artists they sponsored.

As an Executive Sponsor, you may not have the wealth, power and connections of a Medici in the 14th century. But you do have the ability to engage more fully with the Innovation Teams you support so that you pull the best work out of the team, and prepare the rest of the organization to benefit from it.